October 4, 1959, Warsaw, Poland – U.S. super heavyweight James Bradford of Washington, DC, USA wins the press competition with a 170,0 kg lift in the +90 kg class at the 1959 World Championships in Warsaw.

In Warsaw, Bradford was 30 and his bodyweight was 130kg. After pressing 170kg, he took a lead in the tournament with a 10kg advantage over a 23-year old Soviet rookie Yury Vlasov who finished with 160kg in the press contest. However, Vlasov went on with a world record in snatch and outlifted Bradford by 15kg in clean-and-jerk and, for the first time in his career, reached a magic 500kg in total.

On the national level, Bradford won the AAU heavyweight titles in 1960 and 1961. 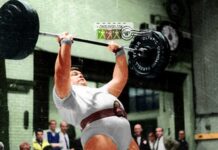 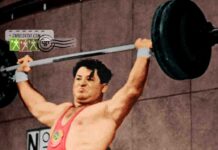